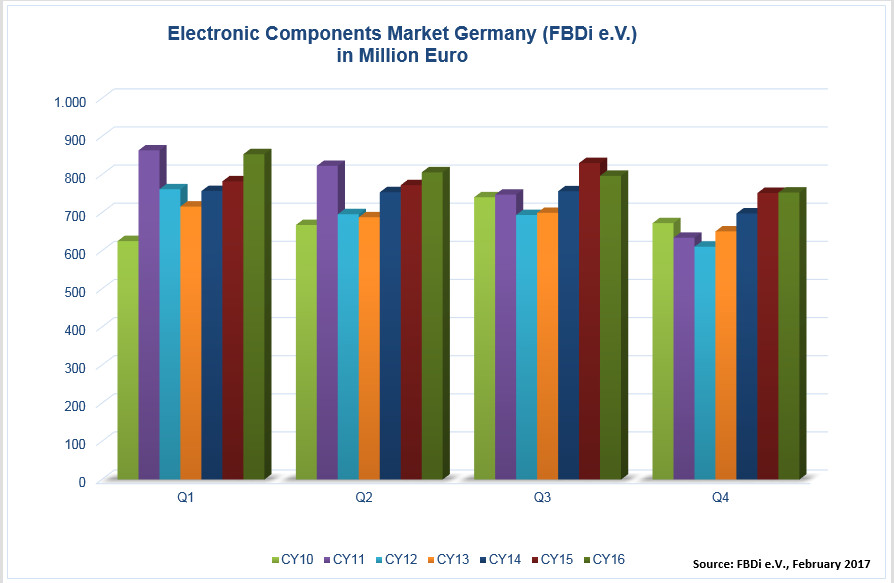 The turn-over of the FBDi member companies in Germany increased by 0.2% to €753m. Incoming orders increased by 9% to €854m, which resulted in a very healthy book-to-bill ratio of 1.13.

“In the end, 2016 turned out to be a little weaker than expected, some of it certainly due to margin erosion, driven by suppliers. With regard to the favourable economic conditions in Germany the question arises why the usually strong high-tech industry is growing rather moderately. On the other hand, incoming orders show strength and resilience, at least for the beginning of 2017.”

Steinberger believes the pressure on distributors from producers remains unchanged.
The full year ended with sales up 2.3% at €3.21bn.

Broken down by technology, semiconductors performed slightly better than average – with a plus of 2.6% in the fourth quarter, and a total increase in the full-year of 3.45% to €2.26bn.

Passive components dropped by 5.3% in Q4 and electromechanics also experienced a decline of 4%.

Smaller product areas like displays and sensors showed significant quarterly swings, both have dropped in a year-to-year comparison.