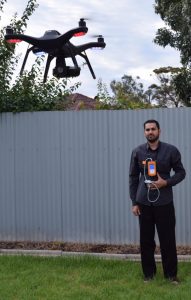 The technique uses a standard camera and an image processing algorithm created by PhD students, Ali Al-Naji, pictured below, and Asanka Perera, and remotely measures heart and breathing rates on several people simultaneously, even if they are moving.

The algorithm isolates and processes movement in the subjects faces and necks.

“The drone has a stabilised commercial go-pro attached to it,” said project supervisor Professor Javaan Chahl. “The drone will single each person out automatically and provide a trace for each individual as to where their heart rate and breathing rate is. Ali was able to extract the heart rate and breathing rate of the person without any difficulty.”

While the drones took measurements from a distance of three metres in recent trials, “e’ve also used telephoto optics to look out over 50m and we will expand this to 500m in the near future using a telescope”, added Chahl. “There’s also situations in clinical settings where you wouldn’t really think it’s worth having electrodes and instruments to monitor patients, but if you can just have a camera do it, you may be able to put instrumentation where you wouldn’t normally put it.”

As well as disaster and war zones, applications could include monitoring the vital signs of residents in nursing homes or in areas prone to human infection such as neonatal wards, said the University, adding that the research began as a response to increased infection rates in countries where electrodes were being used to detect vital signs in neonatal babies.

The research is published in Biomedical Engineering Online, and was  conducted over three years using 15 healthy humans aged between two and 40.