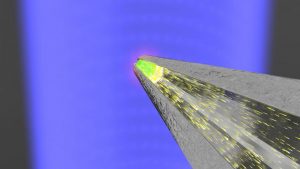 “We want to develop this technology so that it could be used in radiotherapy, for example,” said Thierry Grosjean of the FEMTO-ST Institute at France’s National Centre for Scientific Research. “Specifically, the sensor could allow a real-time measurement of how much radiation is being delivered to a tumour via endoscopy.”

Key to operation is a scintillating material which converts received X-rays to optical frequencies.

The optical antenna gathers emissions from the scintillator and launches the photons into the single-mode fire. Without the antenna, coupling would be too poor.

“An optical antenna works much like a radio frequency antenna, offering a way to interconnect an emitter with free-space,” said Grosjean. “We demonstrated that they can be used to control the directionality of the emission from scintillators.”

Although the X-ray sensor fabrication required a clean room facility, according to the team, it is not a difficult or expensive process.

Experiments indicate that the sensor has a spatial resolution on the order of 1μm. To allow the tip to be used to as a low-energy X-ray scanning microscope to distinguish chemical components in composite materials, this needs to be improved to 100nm, said the researchers.