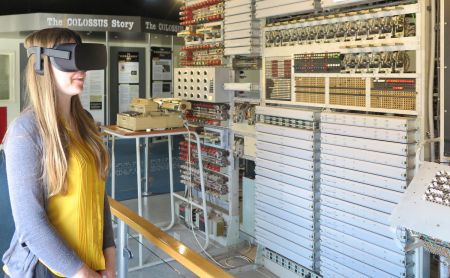 Running until Sunday, 27 August, the idea is to use virtual reality (VR) technologies to bring to life the history of Colossus – the first electronic computer.

The web and mobile company Entropy Reality, which specialises in advanced content management “using Ruby on Rails, iOS, Android, Windows, HTML5 and more”, is based in the Bletchley Park Science and Innovation Centre.

It has worked with the management at the Bletchley Park museum to create a virtual reality experience in the Colossus and Tunny galleries, “where users can walk around the galleries and immerse themselves in the story of how code breakers shortened the Second World War by unravelling Lorenz, the most complex enemy cipher, used in communications by the German High Command”.

Margaret Sale, a trustee at the NMC, said the VR experience is astonishingly good and pushes the boundaries of current technology in homage to the world’s first computer. “It brings a whole new dimension to the possibilities of computer conservation and for the outreach display of Museum artefacts,” she said.

Eddie Vassallo, CEO of Entropy Reality, described the challenge of creating the VR representation of Colossus. “Its size and detail are mind-blowing in real life,” he said.

“For the virtual world, we required massive servers to process its 65 million points of data. Each shot took 31 hours to process and export. Then we had the huge post-production task of stitching together all our images and deploy various tricks of the trade, just like a magician, to make sure the viewer looks where we want them to.”

The National Museum of Computing, Summer Bytes special opening times are from Thursdays to Sundays from 12 noon to 5pm, until 27 August.

You can view the full details of opening times and guided tours over the next few weeks.