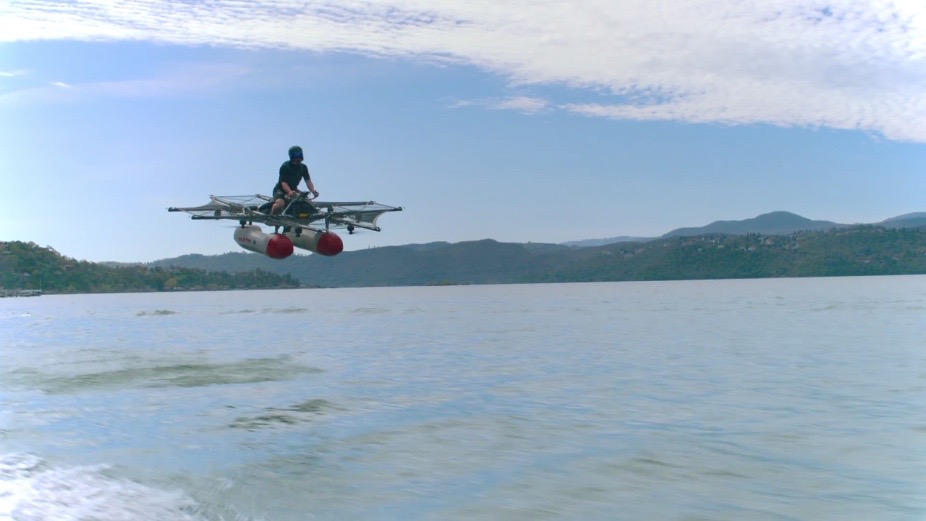 Ever dream of driving a flying car? Later this year, you may get the chance to.

That is, if you stretch your definition of ‘car’, and can afford a Kitty Hawk Flyer.

The Flyer, you’re surely wondering, is an all-electric flying vehicle made by Kitty Hawk, a startup backed by Google co-founder Larry Page. The first version of the Kitty Hawk Flyer, shown off in a video released today, is designed specifically to fly above water.

It weighs just 220 pounds, according to The New York Times, carries one person, and is powered by eight battery-backed propellers. Rising to an altitude of 15 feet, the Kitty Hawk Flyer could be our first real glimpse at the future of flying transportation.

“We’ve all had dreams of flying effortlessly,” Page said in a statement to the Times. “I’m excited that one day very soon I’ll be able to climb onto my Kitty Hawk Flyer for a quick and easy personal flight.”

Driving, er, flying the vehicle looks relatively seamless, if the video is to be believed. According to the company, you don’t need a pilot’s license to fly the craft, and anyone can learn to take it to the sky “in minutes.” The Kitty Hawk Flyer is approved to fly in uncongested areas under the US Federal Aviation Authority’s ultralightweight category.

Naturally, having any flying vehicle, even in unpopulated areas, raises a host of safety and regulatory issues, but Kitty Hawk is working with the FAA to suss out the necessary rules to keep everyone safe. No doubt fliers will need to exercise plenty of common sense when going airborne as well.

Something like the Flyer likely isn’t cheap, and though we don’t have an official price yet, interested parties can pay $100 to receive a $2,000 discount when the Flyer goes on sale later in 2017.